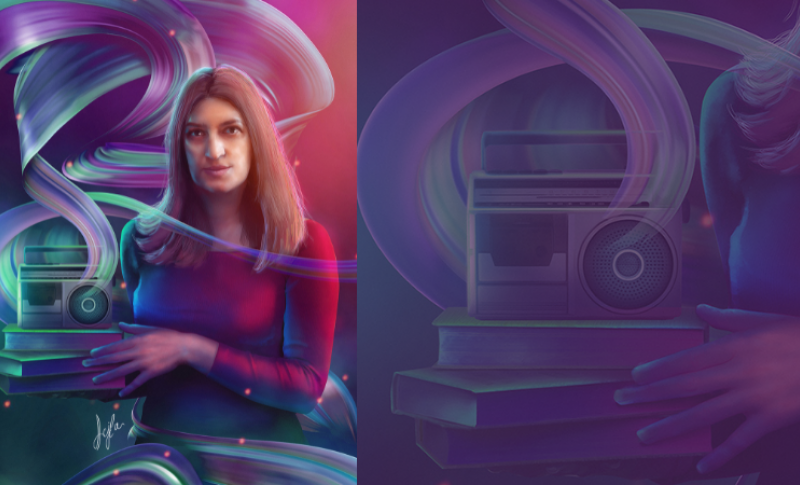 Throughout March Balkansmedia.org will present and celebrate just a few out of million women in media that are everyday breaking the barriers and paving the road for the younger generation of female journalists and media workers. In partnership with Lejla Ahmedspahić, one of the illustrators who worked on the project #ŽeneBiH we created six illustrations of amazing media workers in the Balkans in order to introduce you to women in media from your countries and countries from the region, and to share hope with younger generations of media workers that they are not alone, and that they have support and a foundation to build upon.

Today we are presenting our heroine Mirjana Milutinović, director of Kontakt Plus radio from Kosovska Mitrovica.

Mirjana Milutinović, born on the 20th of December 1973, in Kosovska Mitrovica, where she completed her primary and secondary education.

She studied Literature and Serbian Language at the Faculty of Philology in Prishtina. She worked in education for a short period of time.

Even though radio attracted her from a young age and teenage days, she never tried to pursue working at a radio station, due to her nature which doesn’t fit in with ambitions in public speaking and also because of limited choice of media at the time.

However, after the Kosovo conflict in 1999 and change in life circumstances, she starts her media career.

She was appointed as the Director of Kontakt Plus Radio from Kosovska Mitrovica in 2004. She gave up her corresponding career in order to fully dedicate herself to management.

Kontakt Plus became one of the most important media in Kosovo, mainly for its professional reporting and specific thematic programs and projects that promote real individual and collective values and intercultural bonding, which is very important for the region it reports from.

Since 2012, Radio Kontakt Plus operated the information portal www.radiokontaktplus.org.

Mirjana is the President of KOSMA network (network of Kosovo radio stations broadcasting in Serbian language). She is married and a mother of three.